From Toys to Treasures - An Evolution of Banff's Bears 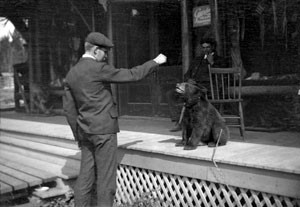 Early visitors to Banff were often drawn by the opportunity to view wildlife. Although bears were officially protected from hunting from 1902 onwards, feeding and other forms of interaction were frequently encouraged. In some cases, steps were taken to ensure visitors were able to see these animals.

In 1907, Banff opened a zoo in what is now Central Park. The early zoo was an enlargement of the existing aviary, and showcased cougars, elk, monkeys, and a polar bear known as "Buddy." In 1915, two black bear cubs were acquired after their mother was shot for aggressive behavior. Tourists were also encouraged to visit the town dump to view bears, and observing the dump bears was a popular summer pastime.

Some private operators used animals to promote their businesses. Mr. Casey Oliver, owner of the Sanitarium Hotel, kept a pet bear. One anecdote describes how the lonely bear crept inside during the night and curled up in bed with a surprised guest! Similarly, Norman Luxton kept a black bear cub outside the Trading Post to attract attention. He described the bear – known as Teddy - as "a sure drawing card for eastern city-slickers looking for a piece of the Wild West." Feeding Teddy biscuits and chocolates was a fun activity for both visitors and locals, although one young boy took this too far. As a prank, he laced a chocolate with chili peppers before feeding it to Teddy. The spices made the bear cub so agitated that the RCMP requested his removal, and Teddy left Banff to live with a hotel keeper in Golden.

The early treatment of Banff's bears may seem shocking to us now. Increasing interest in conservation, and recognition of the potential harm of habituating wild animals, has significantly changed the way Banffites view and interact with local bears.

In 1937 concern over animal cruelty, coupled with tight economic circumstances, forced the closure of the Banff zoo and the animals were shipped to the much larger Calgary Zoo. Also in the late 1930s, Parks Canada began to discourage visitors from feeding and interacting with wild animals and the idea of an education campaign and "no feed" signs were introduced. In 1944 a "Bears are Dangerous" pamphlet was published, and in 1951 it became illegal to feed, touch, or entice bears.

Today, no bears are kept as pets in Banff. Instead, Parks Canada, the Town of Banff, and local residents work to discourage human-bear interactions and to promote safe bear behavior. Secure garbage and recycling facilities discourage bears from entering town in search of food, while hikers are advised to make noise and travel in groups. For more information on current bear conservation and management, please contact Parks Canada at one of their visitor information centres or visit their website, Bear Management in the Rocky Mountain National Parks.

In partnership with the Archives at the Whyte Museum of the Canadian Rockies, The Banff Heritage Corporation is proud to profile these iconic reminders of Banff's natural heritage as part of its Landmarks and Legends Series.