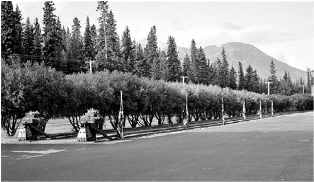 In the heyday of train travel, as many as seven passenger trains a day would pull into Banff Station, bringing tourists from as far away as Boston and New York. Arriving visitors were welcomed by vistas of willow trees, rock gardens, and flower beds – a beautification initiative led by the Canadian Pacific Railway's Horticulture Department.

Railway gardens were first planted in the late 1890s, and had spread to most principle stations in Canada by the 1920s. By the 1950s, the CPR employed 150 to 200 gardeners, and supported the activities of an additional 12,500 volunteer horticulturalists. Banff's first gardens were created in the early 1920s, and the station's first official gardener was a man named Victor Sugg, who was employed from 1923 until his retirement in 1952.

Under Mr. Sugg's care, Banff Station was landscaped with formal flower beds, a planted "traffic circle" to direct buggies, and a rock garden. Planted flowers included gold calendulas, bachelor's buttons, and phlox. The rock garden, located on the sand banks to the east of the station, was finished in 1945. It was designed to reflect the vastness of Banff's natural landscape, and Mr. Sugg worked over several years on the garden, collecting Rundle stone, tufa rock, and local shrubs.

In addition to the flower beds, Mr. Sugg also planted a row of 48 Golden Willows along Railway Street to provide shade and shelter for waiting trains. Although these Willows were likely planted in the late 1920s or early 1930s, after the 1939 royal visit of King George VI and Queen Elizabeth these willows became affectionately known to many Banffites as the "Queen's Willows." At his retirement party, Mr. Sugg recounted a humorous incident where, while pruning the willows, he found himself assisted by a hungry moose. As he recalled, the moose was "doing a fairly respectable job."

Changing fashions led to the decline of the CPR's railway garden program. In 1970, the circle garden was removed to provide better access for large motor vehicles, and only remnants of Mr. Sugg's carefully collected rock garden remain. The Queen's Willows are the one feature that has persevered, but even these are nearing the end of their lifespan. The trees, which were a mere 2 metres tall during the Queen's visit, have now grown to over 7 metres tall with canopies nearly 13 metres wide. Although the willows are not a native species, they have become an important part of Banff's local landscape. Over the past 75 years they have provided homes for countless songbirds, marked the changing seasons with their colourful leaves, and offered a visual reminder of the Queen's royal tour and the CPR's early prominence.

With the support of CPR, The Town of Banff is working to ensure that the Willows are given required specialist care and monitoring that will potentially assist them to withstand environmental stresses and for the full duration of their mature tree life. Certified arborists and grounds maintenance staff currently monitor the condition of the Willows and provide pruning or removal of dead limbs as needed. The Town hopes to supplement care of the Willows with a succession management initiative which will involve planting saplings between the existing aged stock.

In partnership with the Archives at the Whyte Museum of the Canadian Rockies, the Banff Heritage Corporation is proud to profile these iconic reminders of Banff's natural heritage as part of its Landmarks and Legends Series.

1 - The Queen's Willows circa 1957
Photographer Unknown