Landmarks and Legends Series - May 2008 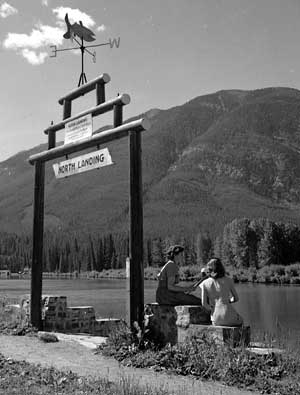 As early as 1899, a set of wooden steps and a landing known as the "Homestead Landing" stood on the north banks of the Bow River.

The landing was one of Banff's early tourist attractions. It served as a stopping point for a steam launch named Mountain Belle (see photo), which routinely transported visitors on a scenic journey upstream to a "pleasure park and picnic ground" located near Healy Creek.

William Mather owned and operated the Bow River Boat House. He and his business partner D.M. Soole, owner of the Homestead Hotel, built the original Homestead Landing. It was a convenience to visitors and residents who wanted to take a tour on the Mountain Belle, but who were unwilling to walk the distance across the Bow River Bridge to the Boat House to board the steam launch. So the boat came to them.

In 1945, at the request of the Parks Department, the steps of Homestead Landing were rebuilt using Rundlestone. A set of low stone walls were also constructed on either side of the steps at this time.

In later years, Homestead Landing came to be known as the North Landing. In 1973, both the North Landing and the Bow River Boat House were dismantled, in accordance with new National Park regulations that prohibited motorboats on the river.

Today, the landing is barely noticeable, even though it was once a thriving tourist spot. The Rundlestone steps and canoe rental business (located upstream) are all that remain of Banff's active boating era. 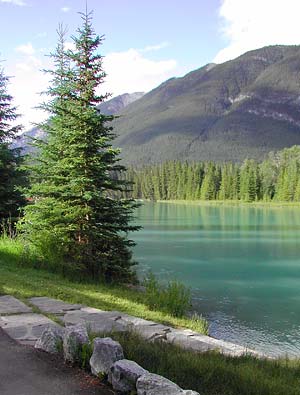 In 2005, the Banff Heritage Corporation restored the Rundlestone steps and rehabilitated the adjacent river bank. The Corporation also installed an interpretive panel near the steps to tell the story of North Landing and it's contributions to the Banff's early tourism economy.