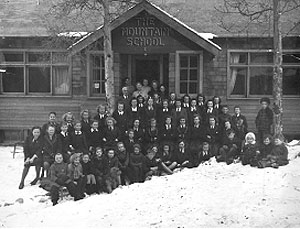 Just imagine a procession of young girls, sketch books in hands, wandering back to the Mountain School located on the corner of Grizzly and Caribou Streets.

They've been on an expedition to Vermilion Lakes. Dressed in green tunics, blazers and hats, their lively chatter and rosy cheeks reflect the enthusiasm for the outdoor activities that were a common part of daily life during the near thirty years of this successful little establishment.

Educators Margaret and Henry Greenham, founded the private girls' school in 1920, valuing the natural environment around Banff for teaching more than the "three R's" of the school system. These dedicated and well-loved locals also encouraged Arts and Drama as an important part of the curriculum.

As leading organizers of many cultural activities in Banff, Margaret Greenham, in particular, was a notably liberated woman ahead of her time. She was the principal creator of the Banff Literary-Dramatic Society, the Merry-Go-Round Theatre for children and Banff Home Industries, a local craft society.

The modest Mountain School started as a two-story building with two large classrooms, a kitchen, small study and several dormitory style rooms upstairs for boarding students. Over the years additions were constructed and new buildings acquired to accommodate an increase in student numbers, particularly during the Second World War, when student intake was at its peak. The school closed in 1947 when the Greenhams retired, both in their sixties, after many years of dedication, care and attention bestowed upon their many students. 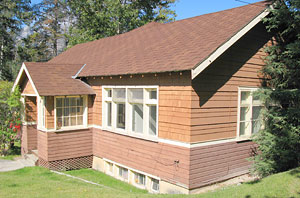 Today, the front gabled entry porch, ribbon windows and wood shingle cladding still reference the original cottage style schoolhouse. Both lots on Caribou Street where the Greenham's private home and the school building are located were recently acquired by a new owner who has been working hard to rescue the buildings from a state of disrepair.

The new owner is a local resident and business owner who hopes to learn as much as possible about this site, possibly discovering relics of the past as the buildings are restored. The new owner is happy to give some attention and care, commenting that there "is something really special" about the history of these resources. "When the interior is complete, I'd like to hang photographs that will remind us of the school so its memory will live on".

In partnership with the Archives at the Whyte Museum of the Canadian Rockies, the Banff Heritage Corporation is proud to profile this significant heritage resource as part of its Landmarks and Legends Series. In recognition of the knowledge of Banff's history within the community, we welcome public input that may provide further insight into this or other profiles in the Landmarks and Legends series.