Such Great Heights: Norman Sanson and the Freedom of Sulphur Mountain 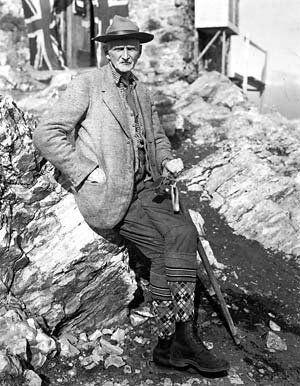 Blowing snow and snow slides were hazards Norman Sanson encountered regularly while recording weather in Banff. But they didn't weaken his resolve.

Sanson's repeated summits to a stone weather observatory at the peak of Sulphur Mountain were legendary.

He broke his own trail and hiked it for more than thirty years. Deep snowdrifts and winter conditions often made his work painful, and the tall meteorologist would vow: "no more winter ascents." But each year invariably found him donning snowshoes and shouldering a pack containing his barograph, barometers and thermometers - just some of the many instruments he used in recording the weather.

Sanson was also known for being one of the first curators of the Banff Park Museum.

With a passion and flair for exploring and collecting minerals, plants and animals, he preferred the endless possibilities of the mountain wilderness to the streets of Banff. He was never without his bag and a collection glass, and he wandered the heights alone for days at a time.

His range of interest included everything that grew, walked, crawled or flew. His hobbies became his life purpose, and the Banff Park Museum as well as the meteorological station became monuments to his passions.

The "Freedom of Sulphur Mountain" was presented to Norman Sanson in the form of a large bronze medal on a purple ribbon. It was awarded at a sunrise breakfast on July 1 1931, the occasion of his one thousandth ascent of Sulphur Mountain to visit the weather observatory. Accounts of this day report that the first rays of sunlight brightened a most impressive scene of some sixty friends who climbed with him to reach the peak. 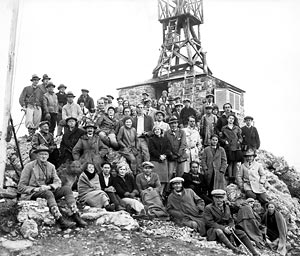 Norman Sanson died in 1949 at the age of eighty-seven, yet his commitment to excellence still shines through many of the displays at the Banff Park Museum, 91 Banff Avenue - adjacent to Central Park and the Bow River Bridge.

In addition to his accomplishments as a naturalist and meteorologist, Sanson was museum curator for thirty-five years. His full collection of more than 5,000 botanical specimens has become valued documentation of now rare or extinct species of the Rocky Mountain region. It is currently kept at the University of Calgary Herbarium for graduate research.

A commemorative heritage plaque distinguishes the home at 110 Muskrat Street where Sanson once lived. It describes his arrival in Banff and the achievements of a remarkable man, colloquially known as "Nature's Gentleman."

To visit this and other interesting Heritage properties pick up a copy of the Walking Through Banff's History brochure from Banff Town Hall for a self-guided walking tour.

In partnership with the Archives at the Whyte Museum of the Canadian Rockies, The Banff Heritage Corporation is proud to profile this local historic personality and his former home as part of its Landmarks and Legends Series. In recognition of the knowledge of Banff's history within the community, we welcome public input that may provide further insight into this or other profiles in the Landmarks and Legends series.