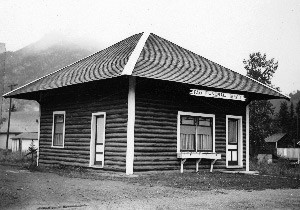 For more than a century, this modest wood cabin has seen an impressive trajectory of uses. It was originally constructed between 1888 and 1890 by a young baker named Athanese Laurendeau who used the cabin as his home and bakery. Banff icon Norman Luxton purchased the building in 1902, and used it to publish the weekly edition of the local Crag and Canyon newspaper until 1929. Subsequent occupants included a butcher's shop, a gas station, a funeral home and a metal work studio.

The Old Crag Cabin was restored by Arctos and Bird in 1999. During the company's construction of the Bison Courtyard development, the Cabin was temporarily relocated to a property further down Bear Street. During site excavations near the cabin, workers unearthed two ancient bison skulls which are believed to be approximately 6000 years old. The Bison Courtyard and a nearby restaurant were named in honour of this discovery.

When construction was completed on the Courtyard in 2005, the Old Crag Cabin was returned to the site as the centerpiece of the development.

The Old Crag Cabin currently serves as the Banff Centre's central storefront for tickets, books, art and souvenirs. It has been evaluated as having a high heritage value and is listed as one of Banff's most important heritage resources. Modest by today's standards, the Cabin is defined by its simple architectural elements with log walls and whitewashed vertical log corner posts. Built with lodgepole pine and Engelmann spruce, which have been dated to 1886 and 1887, the cabin features walls that are 23 logs high, deep overhanging eaves, and a high pyramid hip roof.

The outstanding efforts to preserve this iconic structure were celebrated in 2008 when Arctos & Bird received the Town of Banff's Award for Restoration, Rehabilitation and Adaptive Reuse of a Heritage Building.

In partnership with the Archives at the Whyte Museum of the Canadian Rockies, The Banff Heritage Corporation is proud to profile this signature local venue as part of its Landmarks and Legends Series. In recognition of the knowledge of Banff's history within the community, we welcome public input that may provide further insight into this or other profiles in the Landmarks and Legends series.