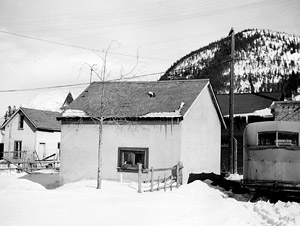 A small cabin off the alley in the 200 block of Bear Street was by no means an architectural treasure, but it was made notable by the talent of Ho Ping. Ping the Tailor was a modest Chinese Canadian who was a master of his tailoring craft.

Known simply as "Ping," he provided service to Banff in the 1940s and 1950s. His one-room shack was piled high with bolts of material and jobs in process.

Ping's signature creations were the ski pants he made. Unlike the bulky, wide-cuffed ski pants that were in general use at the time, Ping's were sleek and tapered, running down into the boot without a wrinkle. Legend has it, that they were a "must have" for Banff skiers.

Memories gathered from his former customers tell of his genius in fitting. He seldom used a tape measure, yet the resulting garments rarely needed adjustments.

A scrap of paper with brief notes sufficed as a record of the transaction, in Ping's shop. Suits, coats, as well as the famous ski pants, were worn with pride by Banff locals and visitors alike.

The modest cabin also served as a living quarters for Ping for many years. Banff seniors remember a cot and a hot plate behind the rolls of fabric. Others tell of his quiet but friendly ways. Ping was well respected by town folk.

Ping's home and workshop is no longer on Bear Street. And despite much effort, no photograph of the tailor has yet been found.

After Ping left Banff, for reasons unknown, the cabin sat abandoned for many years until it was ordered demolished. A lifelong resident of Banff, now in his nineties, recalls that he was given permission to demolish the structure. It is said that building materials were recycled and used in the construction of a residential home on Muskrat Street.

Remembering the contributions of Ping is a small slice of history that celebrates the cultural diversity of Banff.

In partnership with the Archives at the Whyte Museum of the Canadian Rockies, the Banff Heritage Corporation is proud to profile this heritage legend as part of its Landmarks and Legends Series. In recognition of the knowledge of Banff's history within the community, we welcome public input that may provide further insight into this or other profiles in the Landmarks and Legends series.