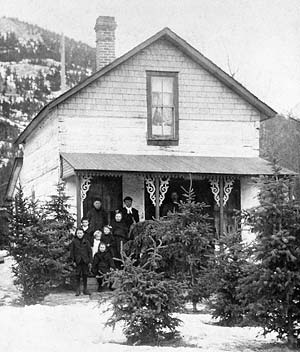 A short section off the main rail line through the Rockies termed "Siding 29" was established at the base of Cascade Mountain in 1883. This was the original settlement of Banff.

Tanglewood is believed to have been built at this siding, circa 1887, by Fred Woodworth, the region's first postmaster. The building was used as the first Banff National Park post office. Like many frontier buildings of its time, it was a basic log structure constructed from local materials.

In 1897, after a station was built further west along the railway line, Siding 29 was abandoned. Tanglewood was subsequently relocated to Beaver Street - one of the first streets settled in Banff.

Tanglewood is now over 100 years old, and it is one of the few remaining buildings from the original settlement. The structure is an example of a modest folk house, in a style sometimes referred to as the "basic homestead house." The original structure consisted of a simple rectangular plan with a pitched roof and front and rear gables.

Local legend and early settler Norman K. Luxton acquired the property in 1907. He created two shed-style additions - a common variation to properties of this design and style. Log veneer was added to the front and side elevations with chinking to give the appearance of a full log house. 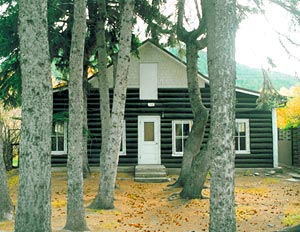 In 1995 the property came under management and ownership of the Eleanor Luxton Historical Foundation. Within one of the most intact historic streetscapes in Banff, the building continues to reflect the early character of the town. Tanglewood is one of the most significant historic resources in Banff, owing to its individual heritage features as well as its direct and long-time association with the celebrated Luxton family.

In 2002, Tanglewood became one of the first three historic residential homes in Banff to be legally protected as a municipal historic resource. Nestled behind a stand of mature spruce trees, it continues as a private residence and is well maintained by its present owners.

Tanglewood is an excellent example of how saving an older building of merit is more than an exercise in nostalgia. It is buildings like this one that provide a sense of continuity and are an irreplaceable record of changing vision and values.

In partnership with the Archives at the Whyte Museum of the Canadian Rockies, The Banff Heritage Corporation is proud to profile this important historic site as part of its Landmarks and Legends Series.