The Bow River pedestrian bridge opened to the public July 2, 2013, three months ahead of schedule, after a brief ceremony at 10 a.m.

Due to the recent flood, the utility crossing and bridge opening has been postponed. The bridge was not damaged by the high water. Landscaping work was delayed, but will now be continued and we anticipate an opening in early July.

The final tests and touches are being put into place this week in anticipation of the commissioning and opening of the bridge. The pedestrian bridge is the first new crossing of the Bow River in Banff since the vehicle bridge was built in 1921-22.

Crews are undertaking the final steps in completion the construction prior to the commission of the bridge and the pipes, now scheduled for later this month. 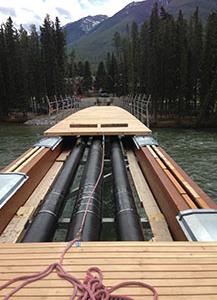 With its 80-metre central span, the bridge is among longest wooden bridges in the world - the full length is 113 metres between abutments and the central span was made as long as possible to provide minimal interference in the river channel, keeping the supporting piers out of water during much of the year. With all wood structures, vibration is a key consideration and the designer developed a unique “turned mass damper” system which enabled the use of wood for the low-profile structure. Small vibrations still will happen in normal use and are to be expected with any structure of this type.

All the wastewater from the north side of the Bow River will be diverted before commissioning. The pumping system is housed in a new wet well on the north side of the bridge and 100% redundancy is supplied for all of the pumping, pipework and power supplies. In this case, we are fortunate to be able to supply a backup to the backup and the old pipes embedded in the river will remain in place as an emergency overflow in case of a simultaneous failure of all of the primary and back-up systems.

Look for announcements of the bridge opening later this month.

The 500 tonne crane set the main beams in place for the utility crossing/pedestrian bridge last week (March 12 and March 14). The beams  are aligned to within 6 millimeters in all directions. The operation, planned and modelled meticulously beforehand, ensured the actual placement and alignment went smoothly. The 500 tonne crane is now demobilized from site.

The next step is to begin the main civil engineering work -- pulling the pipes across and installing the mechanical and electrical equipment. The installation of the handrail and deck will happen after that, concurrently, as well as landscaping improvements.

We are on time and on budget and all indications point to an autumn completion date.

See the time lapse photo of the beams put into place. 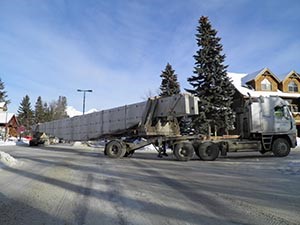 Glulam arches – 130-ft arched wooden beams that will form part of the span across the Bow River – arrived onsite today, January 15, after a two-day journey from Langley, B.C. Their delivery required the coordinating efforts of the RCMP, Fire and EMS, Town of Banff bylaw, streets and engineering departments and the project design and construction teams as the truck made its way down Banff Avenue to Fox and directly on to Muskrat St.

The arches will be lifted into place toward the end of February or early March.

Update from the Project Manager
November 28, 2012 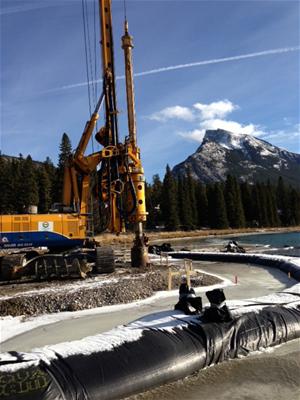 The Town is steadily moving forward on the Utility and Pedestrian Bridge project with our prime contractor, StructureCraft Builders Inc. Piling has been completed on the north side of the river for both the abutment and in-river piers. The drill rig has now been mobilized to the south side of the river to do the same. The coming weeks will see activities happening on both sides of the river with the commencement of the storm water outfall relocation, abutment and wet well excavation and concrete work on the north. The abutment and wet well work will continue through December and January. The concrete work for the south abutment will start following the completion of the piles and will be done in conjunction with the work on the north side.

While activities are happening on-site, the assembly of glulam girders, deck panels and pile caps is underway in the shop fabrication process through November to January. The current plan is to ship materials to site when ready to be put in place, to avoid congestion in the relatively small construction site.

With all environmental agency permits now in place, the Town is providing environmental impact mitigation advice, daily construction monitoring, and Parks Canada liaison on this key new infrastructure project. Large, water-filled containment dams and contingency silt curtains on both sides of the Bow that are proving very effective at keeping out any of the sediment/turbidity generated by abutment earthworks and pile drilling from the river.

Pile foundation installation has been going very smoothly to date with the operation being completely isolated from the river and with minimal noise impacts. Several piling methods were considered in the selection of the project design; the drilled pile methodology was selected in part for being considerably quieter than other pile driving techniques.

The unique large-span design was specifically chosen with small footprint piers that will be outside the river channel for much of the year. The project is anticipated to be completed in fall 2013 and will carry all sanitary flows from the north side of Banff to the wastewater treatment plant.