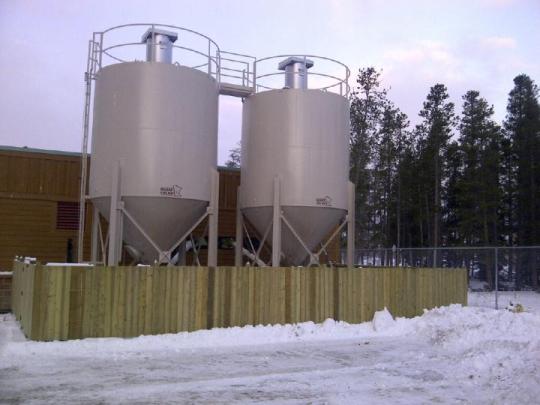 Upgrading the wastewater treatment plant is one of the capital projects being undertaken by the Town of Banff in 2016. Upgrades will increase energy efficiency and the efficiency of the plant. The budget for this project is $1,189,490.

One of the largest projects at the plant is replacing blowers and diffusers. By replacing aging equipment and optimizing the environmental process, it better regulates distributing air flow to the large exterior in-ground tanks which house the biological process. The blowers are hybrid-type fans which draw air through an exterior intake and then pressurize the air through a network of pipes mounted to disk-shaped diffusers fastened to the bottom of the bioreactors. The diffusers help to proportionately regulate and distribute air flow to the heart of the process referred to as the bioreactor.

The new hybrid blowers are energy efficient and electrically driven by variable frequency drives (VFDs). They are housed indoors and provide air to large exterior concrete tanks where the biological process takes place. The diffusers are efficient gold standard units and when coupled with energy efficient hybrid blowers, will distribute the air flow precisely as needed. Bio Win modelling was used as a process modeling tool to predict aeration requirements at different loadings and wastewater temperatures and aided in equipment selection. New oxygen sensors installed along the process will also assist operations to forecast air flow demands based on current influent conditions.

The blowers are one of the largest electrical users in the town. These upgrades are expected to significantly reduce our environmental footprint by reducing power consumption at the wastewater treatment plant.

The project team is also scheduling upgrades to 1 primary and 2 secondary clarifiers. Clarifiers are large concrete tanks used to settle suspended particles at varying stages of plant operation to "clarify" the wastewater. As part of their operation, long arms which stretch the width of the tank drive skimmers that sweep settled material from the bottom, as well as floatables from the surface of the wastewater to further aid the clarification process. The clarifier arm is driven by a motor and gear box referred to as a drive. The Town of Banff operations department are replacing these drives which are at the end of their life and are also taking the opportunity to standardize by installing similar equipment on all units.

Upgrades to the lagoon lift station will also be made at the wastewater treatment plant. Lift stations are generally used to pressurize and pump wastewater from a lower elevation to a higher elevation to achieve gravity flow. Due to potential higher levels of Hydrogen Sulfide (H2s) inherent to lift stations, the replaced components must be stainless steel or shielded with a coating to resist the effects of corrosion. Our lift station, which is used to pump wastewater from an effluent pond and then back through the treatment process, is at end of its life and will receive a significant overhaul. Pumps, guide rails, electrical and piping are all impacted and will be replaced.

The tertiary treatment filtration process, along with pumps, drives and piping from different aspects of the wastewater treatment plant process will be upgraded and replaced using a scheduled priority based approach.